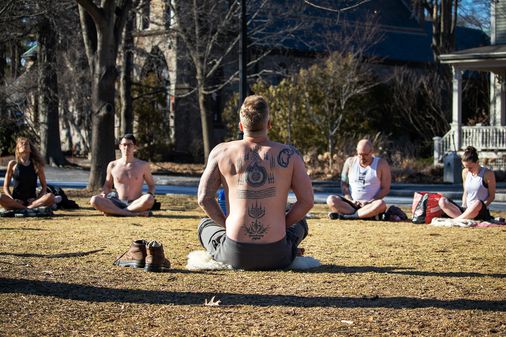 With “Fro-Zen” Meditation, a Yoga Instructor Teaches How to Handle “Good Stress”

A woman clad only in a black one-piece swimsuit and fluffy purple socks pulled her head back to soak up whatever sun she could. It was 29 degrees Fahrenheit as she sat on a blanket that afternoon in Washington Park in Newton.

“It’s been about five minutes, so you’re all a third of the way there,” said David Magone, who led the Fro-Zen meditation program, during the final challenge. “If you’ve come this far, you can go all the way.”

Magone, who founded the Good Stress method and is an instructor at Down Under Yoga, including Newton’s site, led the ‘Fro-Zen’ meditation program, a series of four exposure workouts to the cold from December 12 to February 20, exposing people to cold and heat-related stressors in an effort to improve their physical and mental health.

“I think the part that resonates a lot is that you can’t always have a positive attitude…finding a way to deal with the negative sides of our mind is a very valuable thing,” he said.

Magone, 45, started meditating at 18 and taught yoga while at Portland State University. From Oregon, he continued his meditation journey to Boston in 2003, which led him to study at Harvard University’s Buddhist chaplaincy with Tibetan meditation master, Khenpo Migmar Tseten Rinpoche. Magone studied for years with the meditation master, becoming one of the first non-Tibetan teachers to teach Mangalam Yantra Yoga.

Chloe Jordan, participant and neuroscientist, said she had taken classes at Down Under Yoga for about a year and liked Magone’s method because it helped her feel more comfortable in environments cold.

“The Good Stress method really resonated with me because it kind of builds your mental and neurological resilience as well as a lot of release of good chemicals that kind of help me in my daily life,” she said. declared.

His motivation for founding The Good Stress Method also stemmed from his own experience with anxiety, depression, and PTSD. He said he lost a friend when he was 12 in a cold weather accident and would have flashbacks that would make it very difficult to be in cold environments.

“Essentially, I ended up doing cold therapy by going into an environment that reminded me of my friend’s death,” Magone said. “I was just shocked and amazed to find that stepping into that environment healed me.”

Magone said he has dedicated his life to helping others relieve suffering and feel better about themselves, focusing this challenge on individual growth.

He told the group before heading to the park that they could dress as “sparsely dressed” as they wanted and decide their own level of difficulty for the challenge.

“The only reward you get is your own personal development.”

Charlotte Howard and Taylor Coester can be reached at [email protected]

2022-03-23
Previous Post: Yoga instructor Liz Wendel leads Metta on Wednesday night at The Meetinghouse as we hold Ukraine in our hearts
Next Post: Tired of taking headache pills? Try These Yoga Poses Instead | Health