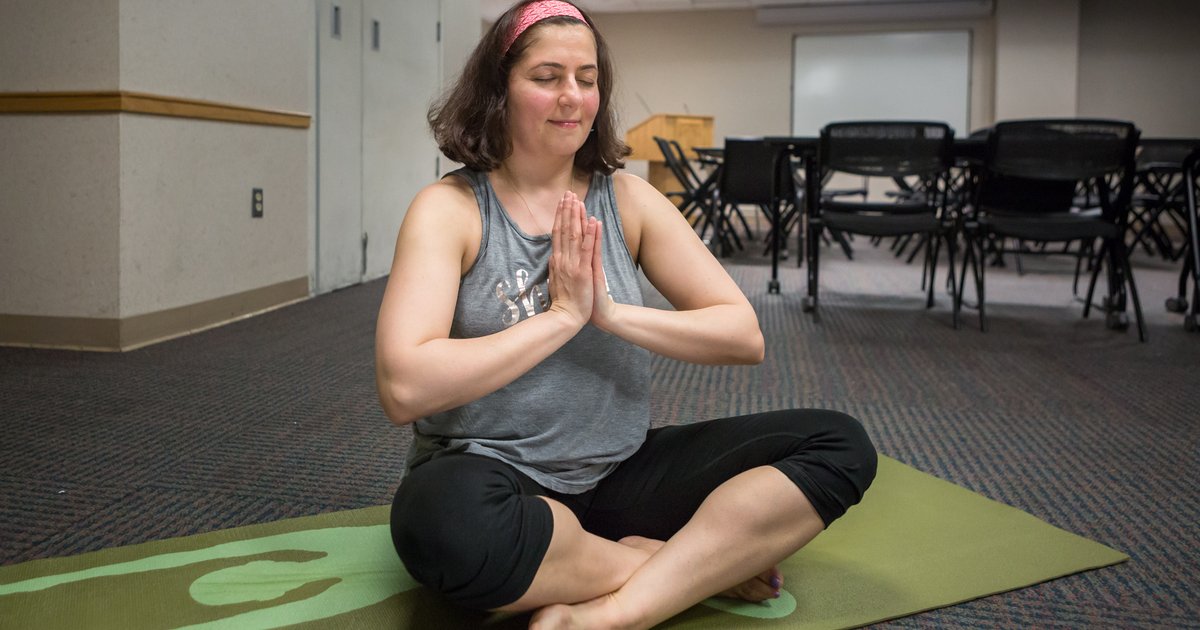 On the Temple University Hospital campus, it’s not uncommon to see Roschanak Mossabeb, MD, walking around with a yoga mat under his arm.

What attracts her to yoga is its interesting dichotomy, that you gain a lot of strength through calmness and relaxation, the body remains flexible, and stretching is good for your organs.

Yoga has been an integral part of Mossabeb’s life since his medical studies in Vienna, Austria, when a friend introduced him to the practice. She continued to practice through her three pregnancies, stopping at 20 weeks in her first pregnancy due to a difficult scholarship at Children’s Hospital in Philadelphia.

It was during these pregnancies that she first discovered how prenatal yoga can really strengthen the bond between mother and child.

Although she strongly believes in the benefits of yoga, it was not until she arrived in Temple eight years ago that she realized the good she could do by teaching yoga to others.

THE POWER OF YOGA

While working at Temple, Mossabeb, who lives in Newtown Square, began to notice that places for yoga and meditation weren’t that easy to find near the Temple campus in north Philadelphia.

Knowing that her patient population faced high rates of teenage pregnancy, poverty and substance abuse, as well as other high stressors, she wondered if the availability of yoga classes could help, especially mothers-to-be.

After asking some Temple mothers about whether such a class would be warmly welcomed, she decided to create a prenatal yoga class.

â€œI thought it would be beneficial for our mothers to have a safe place to come for an hour to reduce stress, relax and focus on the pregnancy. Because you devote this time to your unborn child, you strengthen the bond between you and your baby, â€Mossabeb, 45, told PhillyVoice.

In addition to gentle yoga positions and breathing exercises, she also offers nutritional advice and health information in a relaxed setting.

Each mom is given a yoga mat to take home to make it easier to continue with the practice. Not only does Mossabeb donate her time as a teacher, but she asks her friends and colleagues to donate money to buy the yoga mats and other class materials.

Once she decided to start a prenatal yoga class at Temple, Mossabeb took the plunge into instructor training, which she completed within a year. Classes started last spring.

Doctor and researcher – and mother of three – her plate was already full before she obtained certification and developed the program. But if you’ve got a passion for it, you’ll make it work, she said.

Before the start of classes, Mossabeb had to overcome his fear. â€œI’m not a shy person, but teaching yoga is different; it’s like a little performance you’re preparing, â€she explained. â€œYou have to be comfortable talking to a group of women you’ve never met before. “

Currently, the course is held one Saturday per month in coordination with childbirth classes at the hospital, making it easier for mothers to attend. The quieter ambience of the hospital on Saturdays allows for a more personal environment for moms who join the class.

â€œIt has been an interesting but beautiful trip so far. The response has been excellent. I only wish we could have it more often, but with working two weekends a month and having kids, this is not possible at the moment, â€she said.

â€œI would love though if one of the patients who took the class became a yoga teacher and became an inspiration to other moms,â€ she added.