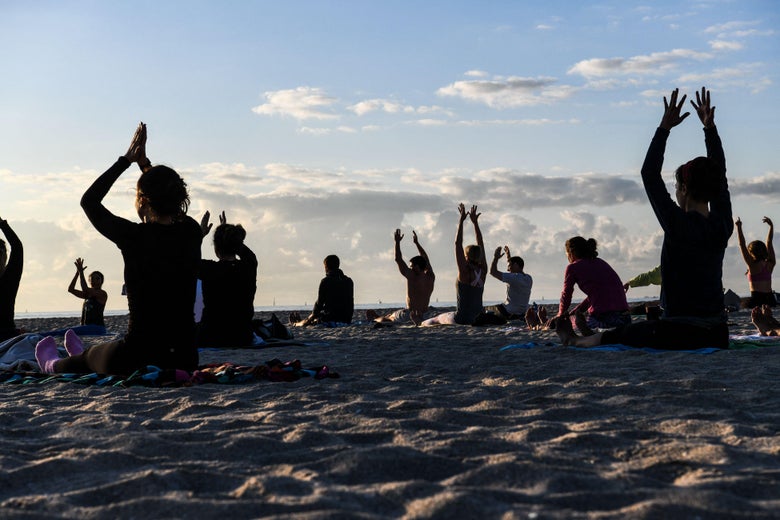 An Alabama yoga instructor says the state is repealing its ban on yoga in schools.

By: Joseph E. Warner
In: Yoga instructor
With: 0 Comments

Last week, the state of Alabama finally repealed its ban on yoga in schools, the only law of its kind in the country. The ban, which was implemented in 1993 after a lobbying campaign by conservative Christian groups, was aimed at keeping the practice’s Hindu roots out of public education. There have been repeated attempts to repeal the ban in recent years, but each has failed.

The new law, which allows interested schools to offer yoga as an elective class or activity during the next school year, isn’t exactly a resounding endorsement of the practice. It states that only the physical elements of yoga are allowed. It explicitly prohibits chants, mantras, mudras and mandalas. Parents will also be required to sign permission slips indicating that they understand that yoga is part of Hinduism. (Yoga, in reality, is a broad category of practices, schools, and disciplines found in Hinduism, Buddhism, and Jainism, as well as a secular form of exercise in some places.)

To find out what it’s like to see yoga go from a prohibited activity to an officially tolerated practice, Slate spoke with Jamie Robertson, an instructor in Orange Beach, Alabama. Robertson, 47, is a county school speech language pathologist who runs a studio in town in the evenings. Robertson has also taught at youth yoga camps and advocated for the ban to be repealed. This interview has been condensed and edited for clarity.

Slate: When did you learn about the ban?
Robertson: When I first obtained my teacher certification, about seven years ago, I sent a letter to the state: â€œWe need to introduce yoga in schools, there are already so many teaching programs. studies, let’s invest in one. Let’s just put it in every school in Baldwin County. And I really thought I was a visionary. Instead of starting with a manager, I started at the top in Montgomery. I thought they were going to say yes, and I was just going to jump in. But I got a letter back, and it was a copy of that early nineties bill, saying that â€” that was strong language â€” it was absolutely banned in schools. It brought me to a halt. Instead, I had to take after-school programs and go through private agencies, like Girl Scouts.

What did you think when you learned about the ban?
I thought that was ridiculous, just because I knew how much yoga helped me with anxiety in my early twenties. And being a Christian and raised in the church myself, it didn’t make sense. I just didn’t make the connection with religion. If we can teach children about self-awareness and self-regulation, it can help with attention issues and anxiety. Yoga is the best fun way for kids to learn mindfulness and body awareness, and then take control of their behavior.

Some of the naysayers have described yoga as almost dangerous. The new law states that “school personnel may not use any technique involving hypnosis, induction of the dissociated mental state, guided imagery, meditation or any other aspect of Eastern philosophy and religious training.” . What do you think of that?
I read something about hypnosis, like we’re going to teach them how to be hypnotized, and it’s just funny to me. What children need to know about meditation is important, but it’s just stillness. As long as you’re not using guided imagery, I guess we’ll have to be careful with this. I think the wording is going to be important. When I teach mindfulness and stillness to children, which can be considered meditation, it â€œworks on their focus and attentionâ€. And there is nothing wrong with that. I just think we’re going to have to be careful about educating parents and making sure they understand that we are teaching from a scientific and non-spiritual perspective when working with children.

Have you ever seen people oppose your practice?
I’ve taught so much over the years, and I can think of maybe two situations where they didn’t come back, because they were uncomfortable with it. And it was because they didn’t understand it. Out of the hundreds of people I have taught, there have been a few who were offended and thought it was against their religion. Which, as a Christian myself, is difficult for me to understand, because it brings me closer to God.

So you think it’s going to be pretty widely adopted in schools?
I do. The principals I spoke with who studied mindfulness and yoga, their only obstacle was that they didn’t want to get into trouble with their superiors or in legal trouble. And honestly, there are teachers who didn’t even know there was a ban. And so there have already been a lot of teachers making videos in classrooms, physical education teachers who just taught breathing, stillness, and stretching, who are probably surprised to learn that it there was a ban.

Did you do anything to celebrate the passage of this bill?
Oh, a cheer and a scream and a few texts to people. I started to get so many texts and emails, because everyone who knows me knows that I have really been an advocate for it for many, many years. I mean, it’s been a long way. For many years, I felt so alone, knowing the benefits it could have for young people in Alabama, and just not knowing how to make a difference or how to make it happen. And then when I heard the news, oh, my God, I was so excited.

2021-05-26
Previous Post: 13 yoga poses to do when you wake up to start the day off right
Next Post: Yoga Instructor Who Watched Father Slowly Die ‘Drugged To Death’ Makes Powerful Plea